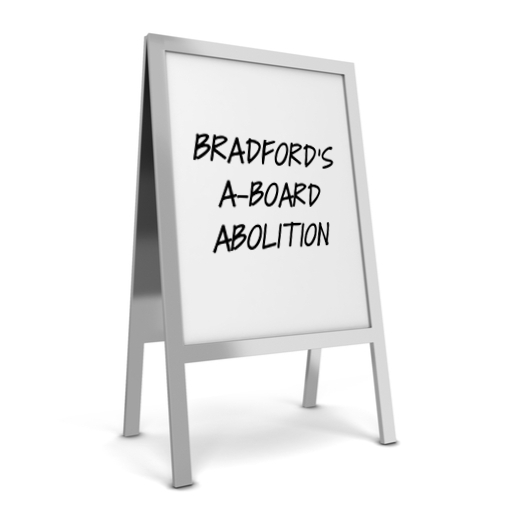 Agree or disagree? What do you think of Bradford City Council’s decision on A-boards? Image by Montego (via Shutterstock).

We at SignFX see A-boards as an effective form of outdoor advertising. They drive customers to your shop when placed on your forecourt. It gives them the impression you are open for business. They are designed to inform and advertise.

Placed in the wrong position, they can be a menace for pedestrians and road users. Especially visually impaired pedestrians. Last week, Bradford City Council voted to ban A-boards throughout its boundaries. Following a free vote on the issue, last week’s result was welcomed by disability campaigners. A licensing solution had been rejected.

Maqsood Sheikh, regional campaigns officer for the Royal National Institute of Blind People was pleased with the decision. He said: “I think it shows Bradford Council is leading the way in removing obstacles not just for blind people but for people with disabilities.”

Over in Keighley, local businesses were less than impressed with Bradford City Council’s decision. Graham Benn, a DIY shop owner and chairperson of the town’s Business Improvement District said in the Keighley News: “My understanding is that if the A-board is within 600mm of your shopfront – which is the area you own – the council can’t stop you placing it there.”

He added that: “Having an A-board makes a big difference to us, and we also have brushes for sale outside the front.”

Ulverston Town Council have considered the idea of restricting A-boards. Instead of a total ban, the Cumbrian town have agreed to consult traders on a possible restriction. As with Bradford City Council, they too have cited mobility issues as a factor.